I want to highlight a genius piece of accidental content marketing that graced my newsfeed this weekend.

Content marketing, if you’re not familiar, is basically the practice of a brand creating and distributing content that their audience will find useful and compelling, the majority of time without an explicit conversion intent. While good and intentional content marketing should be tied to a business goal, the immediate effect is usually relationship building, education and lead nurturing.

That said, the example I’ll lay out here is nothing like that. It was unplanned, spontaneous and extremely effective.

Instead of trying to explain it right away, let me just give you an example: 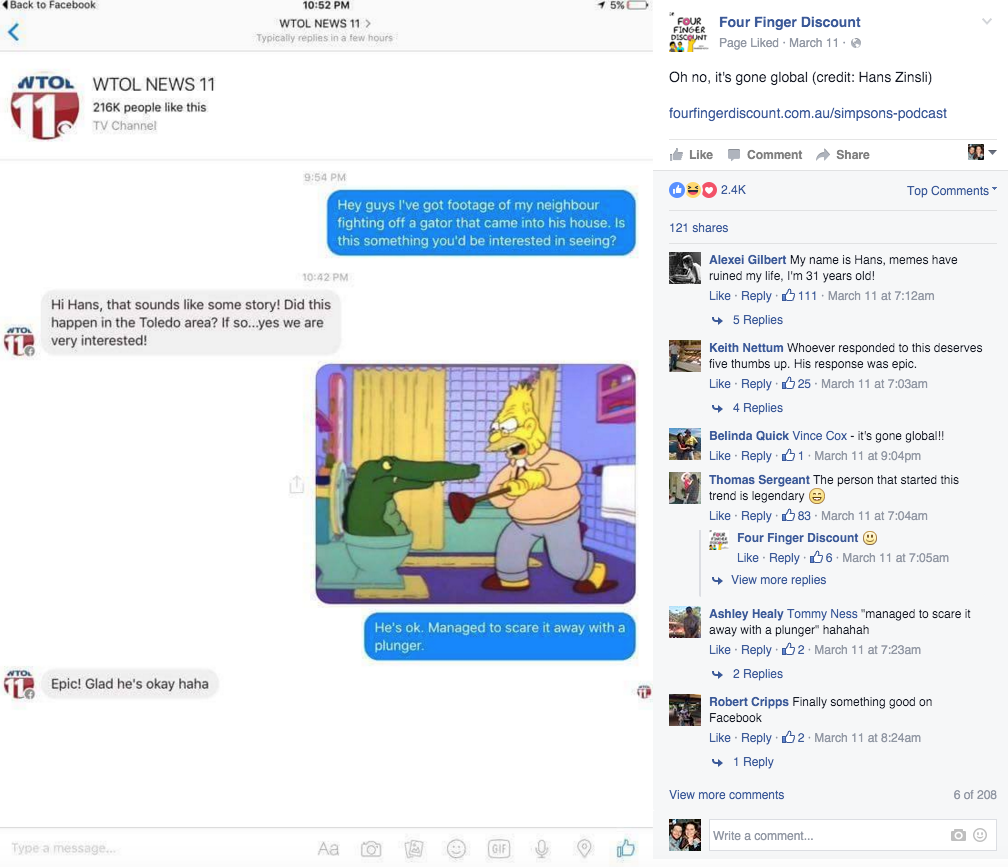 Behold the “Simpsons News Troll.” The format is simple:

The popularizer of the Simpsons News Troll is Four Finger Discount, an Australian Simpsons podcast. The podcast has been running for about a year and its creators have cultivated an active and enthusiastic community of Simpsons fans on Facebook and other social media networks.

Worth noting: FFD didn’t come up with the Simpsons News Troll. One of their fans sent the first troll to them overnight. Taking it for a fluke, they tried one themselves and found that it was actually quite easy to bait television news reporters into responding. High on victory, they posted the screenshots to their Facebook, and it wasn’t long until their followers were replicating the pranks and sending them in to be posted as well.

Most posts got hundreds of shares. Some got over 1,000. It seemed like every one of their followers wanted a piece of the action, and it was easy to understand why. You got all the sweetness of pranking the news with all the glory of sharing it with an already-nurtured global audience of like-minded individuals.

Not only that, but the virality of the prank had a concrete positive effect on FFD’s podcast. They saw subscribers and downloads shoot up in the past few days as more and more Simpsons fans discovered who was stoking the flames of the ingenious trolling.

They Spent a Lot of Time Nurturing Their Community 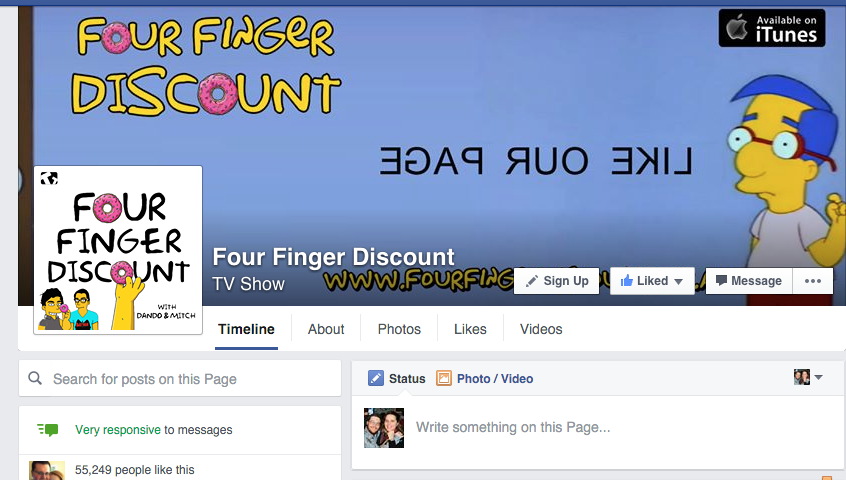 The whole reason I even know what Four Finger Discount is is because I liked them on Facebook. Long before I knew they were a podcast, someone I knew reposted some Simpsons joke that must have tickled me enough to compel me to click “Like.”

That’s likely how most of their 50,000+ Facebook followers found them too. There’s no shortage of Simpsons-centric Facebook groups out there, but FFD is one of the most active and the most fun. They post content with just the right amount of nostalgia, obscurity and humor; they post it frequently enough, but not too frequently; they interact regularly with all of their fans on a one-to-one level via social media; and most importantly, they never try to sell you anything.

The result of all of this work is that their community feels authentic and the audience all seems to be on the same page. It’s not surprising to me that it grew so much.

The reason I want to highlight the community is because too often, people want to just do content marketing. Or they want to do social media marketing, for that matter. And they want big, near-immediate (or at least predictable) results. Most of the time, that isn’t possible. If you want to build any sort of sustainable, lasting traction, then you need to build an audience that trusts you. That audience enables you to do all sorts of wonderful things. If you don’t bother to do that, then you’re starting from scratch each time you attempt to do “marketing.”

To most brands and most marketers, the concept of user-generated content sounds almost too good to be true. You float an idea out to your audience for some kind of content they could generate on their own. Maybe you even offer some kind of incentive, or at the very least, the promise of amplifying worthy content to a wider audience. Instead of using your resources to create and distribute your marketing materials, your users will do it all for you.

Even worse, many brands devise UCG campaigns that are little more than asking their customers to pimp out their products for them. If your big ask is for a customer to take a photo of your product, write about how great it is and attach the appropriate hashtag, then your UCG campaign is doomed to fail. Despite the supposedly equalizing force that the internet has been made out to be (your customers have unfettered access to you and vice versa), you’re still putting yourself on a pedestal and creating a divide between your brand and your users.

Four Finger Discount, on the other hand, created a much more democratic environment. The campaign (and here, I use that term loosely, since they weren’t marketing their podcast on purpose) was not about pimping their product – it was about connecting with a like-minded network of fans and having fun. While they curated and posted the submissions, they never detracted from the joke with any injunctions to go download their podcast (which would have corrupted the authenticity of the whole gesture). They also participated in the comments very often, showing that they were just as delighted as any fan would be. 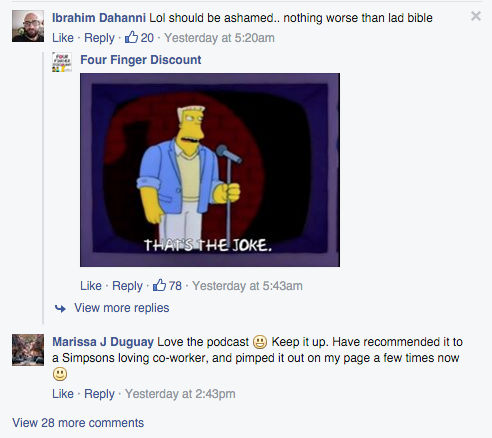 The content itself, meanwhile, was pleasurable and relatively easy to create and share. Their followers were already on Facebook – why not pop over to the page of the local news station, shoot them a message and see if they couldn’t prank them like everyone else? Not to mention that the act of trolling a local news station (and thus establishing a moment of momentary intellectual superiority over local news, oft-derided for its trashiness, pandering and ignorance) plays particularly well to the type of person who pines for the earlier, edgier days of Simpsons glory. 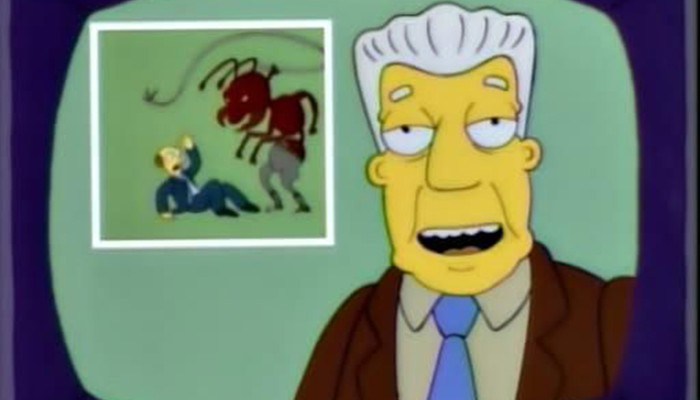 They Knew When to Stop

Do you know someone who routinely beats a joke into the ground? Someone who is still lurking around your office making Borat references, perhaps, or often tells the same story over and over again: 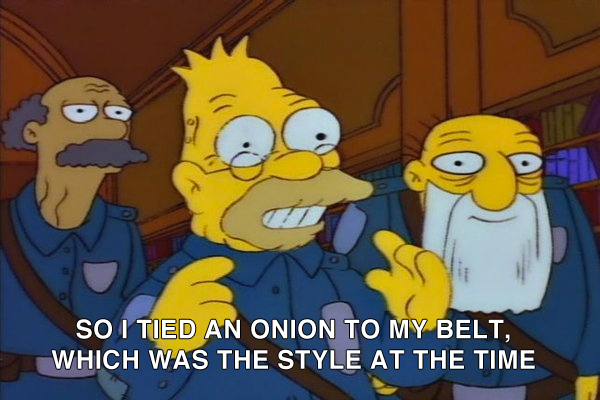 Then you know how sour it tastes when someone, high on success, tries to squeeze every drop of life out of their content marketing campaign. What once was successful and enjoyable becomes a nuisance and a headache.

Four Finger Discount understood that all good things must come to an end, or perhaps they ran out of news stations to troll. Either way, they stopped flooding my news feed with Simpsons News Trolls before they stopped being funny, got back to business as usual and started posting any new submissions to a page on their site.

If I want to have a nice laugh and remember how funny the prank was, I can check it out there.

Let’s not get carried away. You can’t bank on something like this happening organically, and if you wait around for the perfect opportunity for marketing-less content marketing, you’ll never get anything done.

You can set yourself up for this kind of success. You can nurture an audience. You can decide what feels like an authentic interaction for your business. You can get a grasp on what your audience’s tastes are, what the value of your marketing channels is, what your overall strategy is for your particular marketing and/or sales funnel. You can keep an ear to the ground for natural, perfect opportunities.

But until those come along, you can come up with your own ideas. Will they all be perfect? No. Will they all be runaway successes? Hardly ever. But if you learn from what does work by staying authentic, fun and not overselling, you’ll be on track to do better than most.